At the heart of the Blue Oak approach is the recognition that lessons must be presented to children in a way which fills them with wonder, enthusiasm, and meaningful understanding. How a subject is taught is equally important as to what is taught, hence the use of movement, art, and music in the curriculum. Waldorf education is a practical education engaging the child’s will, their imagination, sense of aesthetics and intellect. What engages the child needs to have meaning to the child and the ability to be applied. Thus its’ motive is to develop capacities that allow the child to build a joyful desire to learn and grow.

Here are a few key features of the education methods in a Blue Oak classroom:

Blue Oak teachers focus on integrating English, math, science and social studies around a thematic unit before rotating on to the next subject. During the main lesson, teachers go in depth and approach each subject in a variety of ways, allowing students time for the information to be digested.

Blue Oak creates a strong community through "looping" the grade levels - teachers stay with the same group of students from first through eighth grade. Having the same students through the years, teachers are able to adapt lessons to the needs of interests of their students. Looping helps students, teachers and parents form a fruitful relationships and target long-term goals, and creates students who have strong interpersonal skills.

The classrooms at Blue Oak are carefully curated to create a calm yet inspiring atmosphere. Furniture made form natural materials, walls painted in soothing colors make for an ideal place for children to spend their days learning.

Students are able to deepen their understanding of curriculum by applying lessons to life outside the classroom. Starting in the third grade, students go on overnight field trips that strengthen relationships with peers, encourage connections to the outdoor environment, and provide real-world context for learning the curriculum.

Art as a Teaching Tool

Art is incorporated in every subject at Blue Oak in order to engage children actively in learning and to allow them to develop their own conclusions. Students create their own textbooks, in which they practice handwriting, grammar and composition. By drawing and painting their own images of the concepts they learn, students are able to better engage in their man lessons. Students also learn technical art skills, such as form drawing, mirroring and symmetry.

Recognizing that foreign language is easier to learn when children are young, Spanish language lessons are provided frequently for students in all grades. by the time students have completed eighth grade, they will have had better exposure to the language than many of their high school peers.

Blue Oak partners with Chico Unified School District to provide healthy and hearty meals. The CUSD nutrition team strives to use as many local vendors as possible for our fresh fruits, vegetables, proteins, and dairy. Additionally in Kindergarten, our students are provided with a wholesome snack of various grains, fresh fruits or vegetables and/or cheese and nuts.

Recognizing that the link between mind and body is a powerful teaching tool, Blue Oak teachers utilize movement as an essential element of the curriculum. Students express the concepts they learn through physical motion and rhythm, in age-appropriate ways. This allows children to fully engage in learning by involving multiple areas of the brain, as well as develop physical awareness and comfort in their bodies.

Music plays an important role in the Waldorf curriculum. All students begin learning the recorder and practicing choral singing in the first grade. Third grade students begin to learn violin, and in the sixth grade, students are given the opportunity to continue with advanced violin or another string instrument, such as cello or viola. Blue Oak puts on many school-wide and community concerts throughout the year as well as band performances.

Waldorf education methods encourage students to first develop strong oral communication skills before introducing written language. Blue Oak kindergarten teachers familiarize students with language through the repetition of stories, songs and rhymes. Students are later introduced to letters and words over time. This gradual transition to understanding the written word produces children who have a greater understanding of language, an enthusiasm for reading and advanced vocabularies.

Rich, direct experiences in nature are encouraged for all students at Blue Oak. In the younger years, students create scenes with wood, stones and nuts collected on class nature walks. Older pupils take an experimental approach to studying nature. Students also participate in seasonal festivals through the year.

Excerpts above from Chico News & Review

"Waldorf education is not a pedagogical system but an art - the art of awakening what is actually there within the human being." - Rudolf Steiner

Waldorf schools offer a developmentally appropriate, experiential, and academically rigorous approach to education. They integrate the arts in all academic disciplines for children from preschool through twelfth grade to enhance and enrich learning. Waldorf education aims to inspire life-long learning in all students and to enable them to fully develop their unique capacities.

“The need for imagination, a sense of truth and a feeling of responsibility – these are the tree forces which are the very nerve of education.” – Rudolf Steiner.

Music, dance and theater, writing, literature, legends and myths are not simply subjects to be read about and tested. They are experienced. Through these experiences, Waldorf students cultivate their intellectual, emotional, physical and spiritual capacities to be individuals certain of their paths and to be of service to the world. . .

Teachers in Waldorf schools are dedicated to generating an inner enthusiasm for learning within every child. This eliminates the need for competitive testing, academic placement, and rewards to motivate learning and allows motivation to arise from within. It helps engender the capacity for joyful life-long learning.

After its founding in Stuttgart-Uhlandshöhe in September 1919, the first Waldorf school grew rapidly. The children of workers at the Waldorf-Astoria Cigarette Company came in response to the initiative of founders Emil and Berta Molt, and many other children soon flocked to the school, children whose parents were looking for more humane values and new educational methods after the ravages of World War I. . .

By the start of World War II, 34 Waldorf schools had been founded – in Germany, Switzerland, Holland, England, Norway, Sweden, Hungary, Austria, and in the USA. . . The schools expressed diversity and celebrated common roots. . . The rise of Nazi power and the outbreak of World War II resulted in the closure of most schools in Germany, Austria, and Hungary, and to some schools in Holland and Norway. In contrast, the number of such schools grew in Switzerland, England, and the USA during the war.

From 1945 to 1989 the Waldorf education movement consolidated and became a broadly disseminated, well-preserved educational model. . . The Waldorf movement continued to grow despite sometimes precarious economic conditions. In 1985, there were already 306 schools in 23 different countries.

The global spread of Steiner/Waldorf education, even into the furthest corners of the earth, has continued until today. Interest in Waldorf teaching approaches is evident in about half of all the world’s nations (about 100 countries), independent of language, religious affiliation, or political situation. There are Waldorf kindergartens and schools, and teacher training facilities, on all continents. Parents across the globe are making an extraordinary commitment to support growth and strive towards a future in which humanity is attainable and healthy development and social participation is truly possible. The Waldorf education movement, with about 1,100 schools and over 2,000 kindergartens around the globe, has become the largest free school movement in the world.

Excerpts above from Waldorf-100

Waldorf education was created as a democratic educational model that “would make [students] so healthy, strong and inwardly free that they would become a kind of tonic for society as a whole.” Now, more than ever, it is necessary to embrace that idea and expand its boundaries to include the spectrum of rapidly growing demands that will meet our school’s students when they move into the larger world. Specifically, the following categories reflect the ways in which Blue Oak retains the conceptual vision of Waldorf Education while evolving toward the demands of the 21st-century student:

Multiple Literacies:  Literacy empowers students with the ability to read, write, listen, and articulate in compelling ways.  At Blue Oak, literacy goes beyond the traditional meaning to also include the development of children who are mathematically competent, scientifically adept, and empowered in the upper grades for technological aptitude.

Creativity and Innovation:  Creative and imaginative thinking empowers students with the ability to think unconventionally, to question assumptions, and to imagine new scenarios. Imaginative thinkers craft astonishing work because they recognize their creative capacities and celebrate them through a variety of artistic mediums.  They also act on opportunities for growth and show a willingness to take reasonable risk.

Critical Thinking and Problem Solving:  Critical thinking and sound decision-making empower students with the ability to assess the credibility, accuracy, and value of the information that barrages them every day. Students with highly developed skills in this area analyze and evaluate information while still honoring intuitive capacities. They think through solutions and alternatives and explore new options if approaches don’t work. This often entails working well with diverse populations to make reasoned, ethical decisions and take purposeful action.

Responsibility and Habits of Mind:  A strong sense of responsibility empowers students with the ability to be vital, disciplined, and hard-working individuals.  Responsible students take initiative, self-regulate, and are fully accountable for their own actions. They honor their capacities for reason and resourcefulness with an ability to follow through on commitments and honor their word.

Lifelong Learning:  The qualities listed above culminate in an enthusiastic lifelong learner.  We envision the 21st-century student to be joyful, confident, self- motivated, aware, inquisitive, resourceful, and persistent people who can thrive in an ever-changing world.

Waldorf Around the World

Curriculum at a Glance 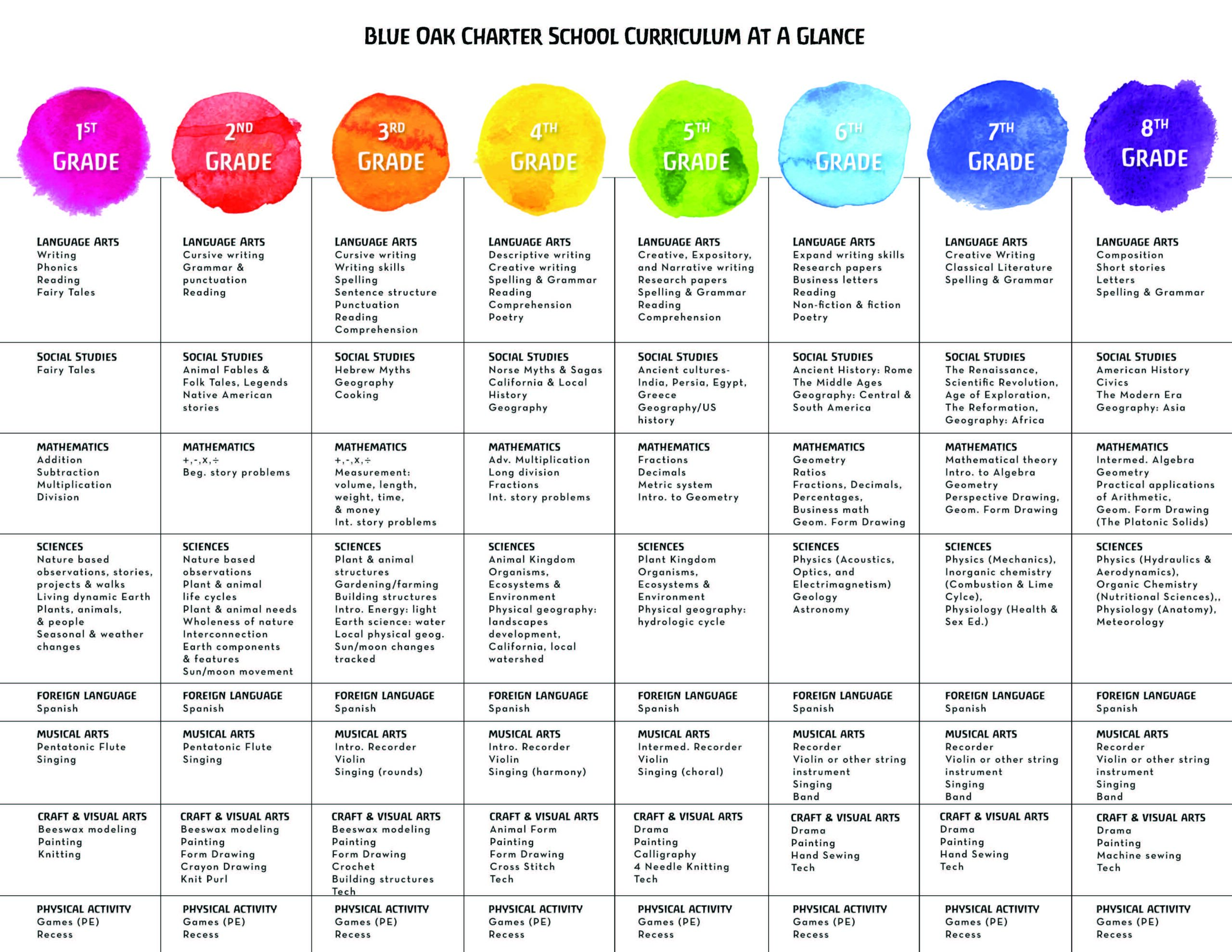 "Receive the children in reverence, educate them in love, and send them forth in freedom." - Rudolf Steiner